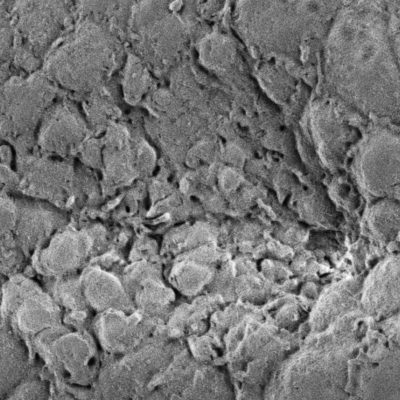 Salivary glands begin as two dimensional plates of ~144 polarized ectodermal cells each on the ventral surface of the embryo. Over a period of ~six hours, these two dimensional plates are converted into three-dimensional fully internalized and elongated tubes ~eight cells in circumference and ~8 cells long. Neither cell division nor cell death occurs once the SG has been specified, so the entire morphogenetic process must be driven by changes in cell shape, rearrangement, growth and collective migration. Fkh, Hkb and a BTB protein known as Ribbon (Rib) are each required for the formation of normal elongated secretory tubes.  In fkh mutants, SGs completely fail to internalize and remain on the embryo surface.  We have shown that Fkh regulates expression of the secreted ligand  Folded Gastrulation (Fog) to coordinate apical constriction by controlling  apical-medial pools of Rho Kinase and apical-medial Myosin activation. Activated apical-medial Myosin then drives apical constriction of SG cells as they internalize to form tubes through a budding-type mechanism.  Although this coordinated apical constriction is required for the normal geometry of the nascent SG tubes, it is not essential for the primordia to internalize, indicating that other processes also contribute to SG tube formation.  Indeed, we have shown that a supracellular myosin cable that surrounds the SG, first described by Katya Röper’s group, also contributes to internalization and that Fkh regulates expression of crumbs to drive this process. SG internalization also requires cells to change their neighbors while also remaining part of a completely polarized epithelium. We have recently identified two new Fkh-dependent target genes that contribute to SG cell rearrangement. 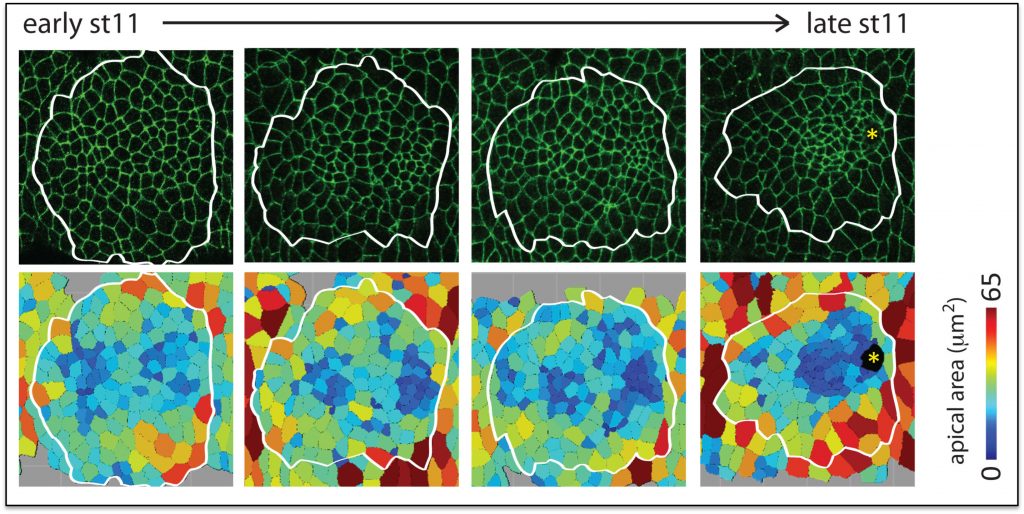 Hkb and Rib are required for full SG tube elongation. hkb mutant SGs internalize but fail to expand their apical surface, leading to the formation of small, puck-shaped SGs.  Hkb controls apical membrane expansion through stabilization of Crumbs (Crb), an apical membrane determinant, and transcriptional upregulation Klarsicht, which mediates microtubule-dependent organelle transport. Rib mutant SGs also internalize but only ever achieve ~60% the length of WT SGs.  Rib controls SG length both by regulating target genes that control apical membrane mechanics and by regulating target genes that mediate cell growth. Current efforts in the lab are directed toward finding and characterizing additional targets of Fkh, Hkb and Rib that contribute to building SGs of the correct shape, size and position in the embryo.

Tracheae begin as ten bilateral surface placodes in the early embryo. Shortly after the expression of Trh and Vvl, placode cells within each metamere (segment) invaginate to form internalized tracheal sacs of approximately 80 cells each. Tracheal cells subsequently undergo a series of stereotypical FGF-signaling dependent branching events. Cells at or near the ends of these branches eventually fuse with cells in neighboring tracheal segments to form an interconnected tubular network that delivers oxygen to every cell in the animal. Each tracheal segment has similar organization in terms of number of branches, number of cells within each branch, types of tubes each branch forms, and the migratory behavior of each branch.  Branches are named for their positions and/or target tissues. Some branches, including the dorsal trunk (DT), elongate primarily, but not exclusively, by cell shape change. Other branches, including the dorsal branch (DB), elongate primarily by cell rearrangement. Among the Trh-Vvl shared targets is the FGF receptor gene breathless (btl), which contributes to tracheal invagination and is essential for the migration of all tracheal branches. Btl-expressing tracheal cells migrate toward target tissue sources of the FGF ligand Branchless (Bnl).  Since Trh is the major transcription factor driving trachea formation, our efforts have been to identify and characterize additional downstream target genes.  Among the Trh target genes we have discovered is Sano, an apically localized cytosolic protein that works with PCP genes to limit apical membrane expansion, and Mipp1, a highly conserved extracellular enzyme that converts inositol polyphosphates (IP6, IP5 and IP4) to IP3.  Mipp1 is highly expressed in the leading cells of migrating tracheal branches where it functions extracellularly to mediate filopodia formation and confer migratory advantage. The characterization of additional Trh targets identified through genome-wide screens is underway. 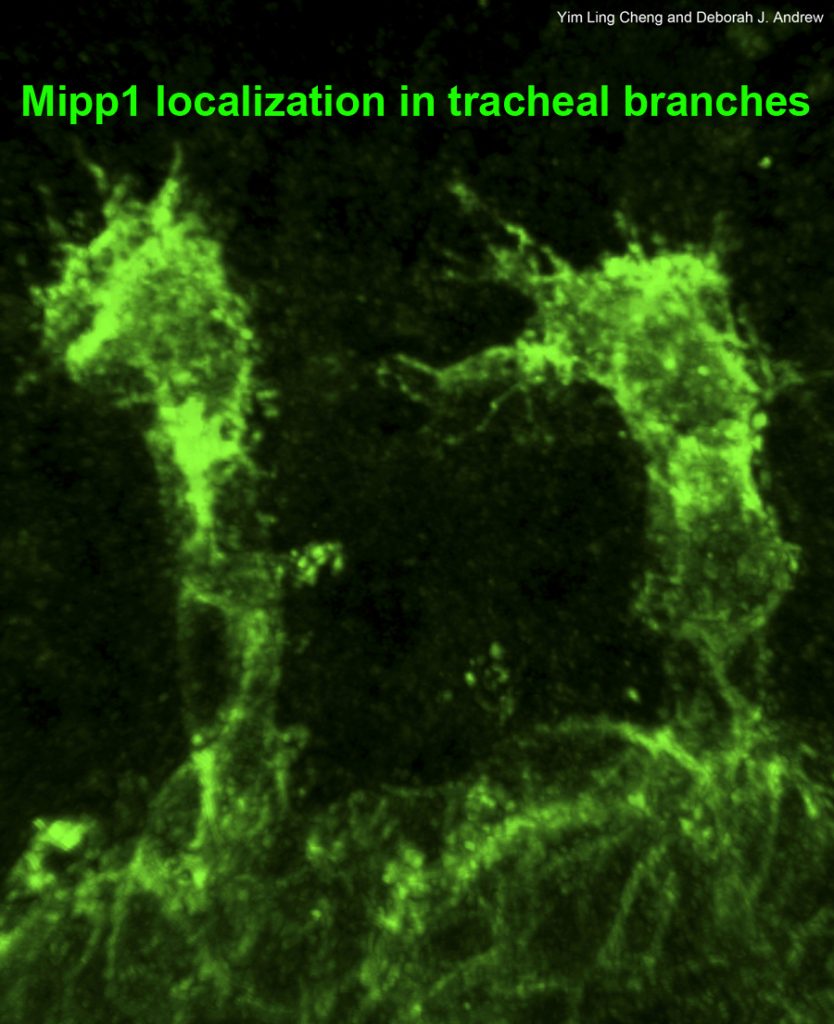 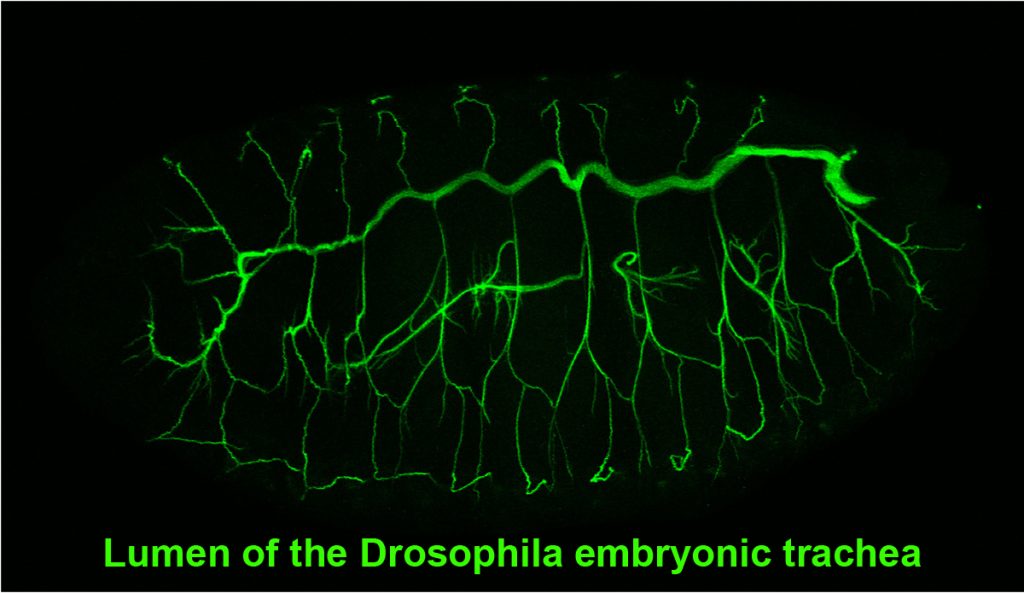